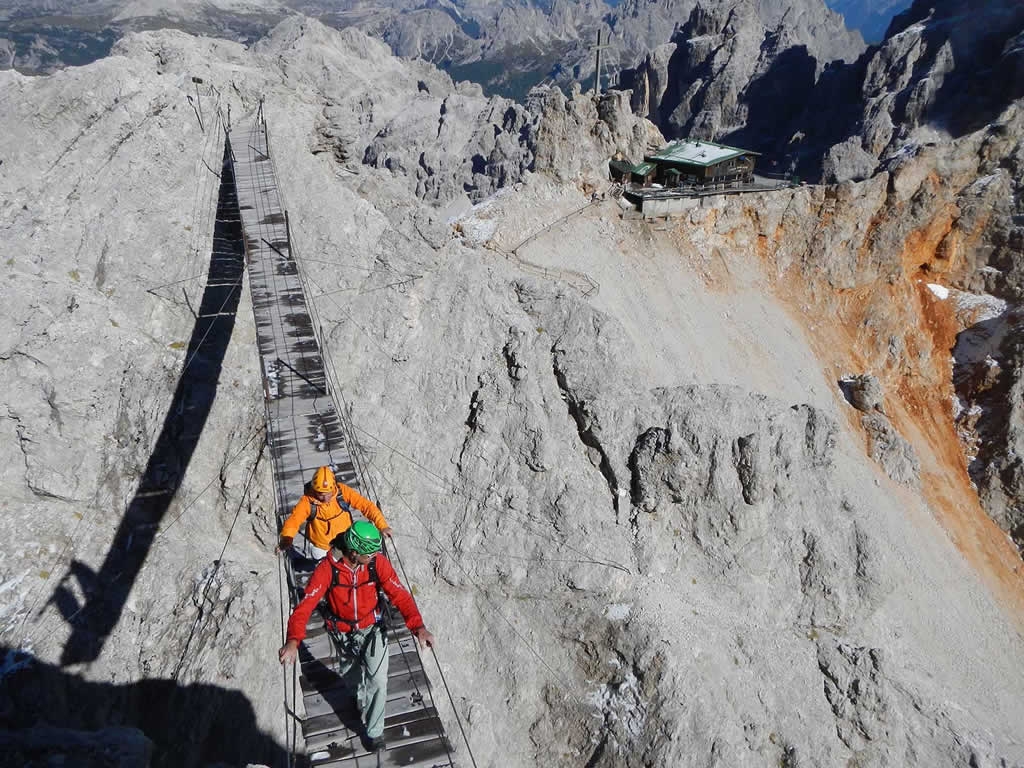 A difficult via ferrata that calls for a high level of fitness, considering the route’s length and altitude. The Ivano Dibona via ferrata is one of the most famous ferratas in the Dolomites, hallmarked by a magnificent 30-metre-long suspension bridge that offers an unmissable opening for the route. The itinerary is on Monte Cristallo, which still preserves the marks left by the Great War, and it offers the possibility of a solitary climb in a location entirely above the Ampezzo Valley.

To reach the start of the via ferrata from Cortina, head towards the Tre Croci Pass until you reach Rio Gere, where you will see a large car park. Take the chair lift from Rio Gere to Son Forca, where you will find the like-named lodge with its incredible views.

From Son Forca, take the steep track that leads you up along the scree slope to the saddle Forcella Staunies: this part of the route, along the scree-strewn gully, takes about two hours (900 metres vertical ascent). Once you have reached the saddle, behind the historic mountain lodge Rifugio Lorenzi (closed), you will find the first iron ladder and the start of the via ferrata.

The itinerary begins with the incredible, iconic “Ponte Cristallo” (Cristallo Bridge), 30 metres in length: crossing it evokes unique and incomparable emotions, and the surrounding landscape will take your breath away. Then take the metal ladder to reach the top of the ridge. From here, the via ferrata continues on the ridges of the Cristallo group, offering a spectacular panorama. During this traverse you can see remains from the First World War that saw action in this area. About halfway along the route, you reach a small bivouac, the “Buffa barracks/bivouac”, and then the saddle Forcella Padeon. Carry on along the path, which continues for a short distance along a scree slope, until you reach a fork. Turn left here towards Monte Padeon and in about an hour, the track brings you back to the mountain lodge Rifugio Son Forca.

The Ivano Dibona via ferrata is not excessively technically difficult, but the constant exposure, the height (3,000 m), its length (5 hours just for the via ferrata section) and its remoteness make it a challenge for experts and regular climbers.

At the fork, instead of turning left on the track towards Monte Padeon, you can take the track on the right which will keep you at high altitude, completing the circuit via the saddle. The path will slope gently as it takes you towards the forests of Col dei Stombe, where, after a winding section, you return to track n° 203 which will bring you to Ospitale in about an hour. If you opt for this variant, plan on leaving a car at the mountain lodge Rifugio Ospitale, because the starting and finishing-points are different.